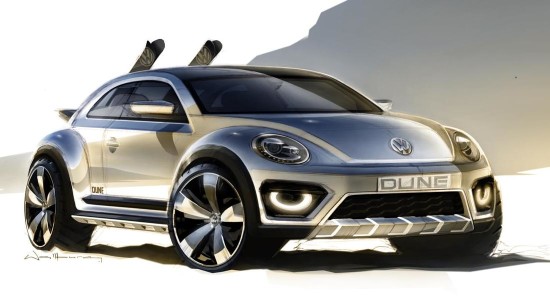 With the world premiere of the Beetle Dune at the North American International Auto Show in Detroit, Volkswagen is giving the public the chance to see a Beetle with a cool and rugged offroad look.

The Dune concept shows the potential for a new production version of the sportiest Beetle ever. The body was raised by two inches and the designers bolted a pair of skis to the roof to show the vehicle’s go-anywhere intentions. Its name, raised ground clearance, and all-terrain look hark back to the VW Bugs that conquered beaches and dunes in times past.

The Dune revisits an idea that was born with the New Beetle Dune concept, presented in Los Angeles in 2000. While the concept car shown in California was not very realistic, especially with its interior and roof structure, the 2014 Dune Concept is a lot more feasible.

The Dune follows the production R-Line Beetle in its running gear. The 210-horsepower turbocharged TSI engine, together with a six-speed DSG dual-clutch automatic transmission, will handle the trip to whatever destination you choose. And just like the R-Line, the Dune puts its power to the ground via the front wheels and a strut-type front and multilink rear suspension, with the XDS electronic differential lock providing further traction.