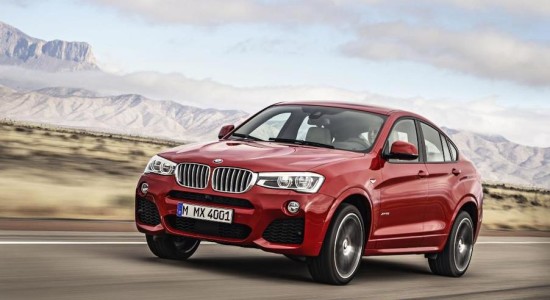 At 184.3 inches (4,680 mm) in length, it is 0.6 inches (14 mm) longer than the X3, but is also 1.5 inches (37 mm) lower (height: 63.9 in./1,624 mm) and cuts a persuasive figure with its balanced proportions and distinctive character. The large air intakes positioned on the outer edges of the front facia and the precise character lines in the front apron lend the X4 a more muscular appearance.

Available M Sport brings the outstanding dynamics of the BMW X4 into greater focus. One element of M Sport is the M Aerodynamics package, which gives the BMW X4 a particularly striking appearance.

In the US, the X4 will be offered with a choice of two TwinPower Turbo engines. The X4 xDrive28i, with a Manufacturer’s Suggested Retail Price of $45,625 will feature BMW’s 240 horsepower 2.0-liter four cylinder while the top-of-line X4 xDrive35i, with an MSRP of $48,925 will feature BMW’s venerable 300 horsepower 3.0-liter inline six. Both models include an 8-speed Steptronic sport automatic transmission with shift paddles as well as xDrive, BMW’s intelligent all-wheel drive system.