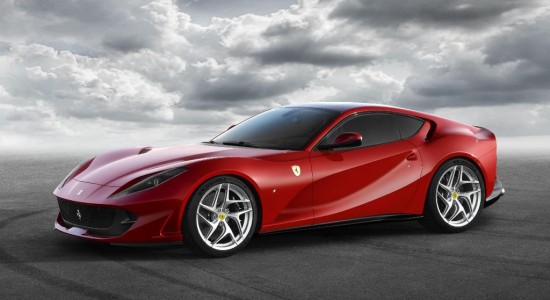 Ferrari has selected the 87th edition of the Geneva International Motor Show for the world premiere of the new 12-cylinder berlinetta, the 812 Superfast, the most powerful and fastest Ferrari in the marque’s history.

This new car not only introduces a plethora of innovative features but is also particularly significant as the V12 series marked the official start of the glorious Prancing Horse story in 1947, 70 years ago this year.

The 812 Superfast thus ushers in a new era in Ferrari 12-cylinder history, in doing so building on the invaluable legacies of the F12berlinetta and F12tdf.

Powered by a new 6.5-litre V12 engine that unleashes 800 cv, the 812 Superfast is the new benchmark in the mid-front-engined sports car segment, achieving maximum power output at 8,500 rpm, which translates to a specific power output of 123 cv/l. Maximum torque is 718 Nm @ 7,000 rpm, a significant 80% of which is already available at 3,500 rpm, improving both driveability and pick-up even at low revs.

The 812 Superfast is equipped with leading-edge control systems and components, resulting in unparalleled handling and roadholding.  It’s the first Ferrari to sport EPS (Electric Power Steering).

Designed by the Ferrari Styling Centre, the new 812 Superfast redefines the formal language of front-engined V12 Ferraris. A two-box design with a high tail reminiscent of the glorious 365 GTB4 of 1969. The design of the flanks visually shortens the tail and is characterised by impressively muscular wheelarches which imbue the 812 Superfast with the power and aggression. At the rear, four round tail-lights inspired by Ferrari tradition emphasise a design crafted around horizontal lines and give the 812 Superfast a broad, imposing stance.