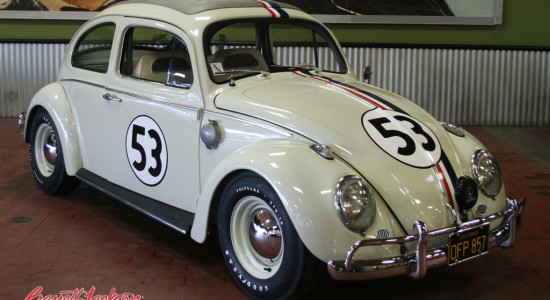 Barrett-Jackson will auction an original “Herbie”, the world’s most beloved Volkswagen Beetle, during the 13th Annual Palm Beach Auction in Palm Beach, Florida.

The ’63 Volkswagen Beetle rose to fame as the star in the 1969 film “Love Bug,” which led to three subsequent films in the original series.

“The Walt Disney studio did a phenomenal job of taking an unlikely car and turning it into a Hollywood film star,” said Craig Jackson, chairman and CEO of Barrett-Jackson. “This specific version is one of a handful that was actually used for driving and interior shots during the movie. While there were quite a few “Herbies” used in the films, only a few remain in existence.”

Known to the movie-going public as “Herbie” and to Walt Disney Productions as “5916,” this car is better known in the loyal Herbie community as the “oil squirter,” as it was designed to squirt oil out of the passenger-side wheel well.

After the car’s final appearance in 1980’s “Herbie Goes Bananas” it was sold into private hands. It was later purchased by Arthur Porter, who had the car restored to its “Herbie Goes to Monte Carlo” appearance and piloted it in many vintage car races until the year 2000. Herbie spent the next few years relaxing in museums. The next owner, Doug Kaufmann, saw to it that Herbie’s interior was restored to its “Monte Carlo” state, and reinstalled the bumpers, which had been removed for vintage racing events.