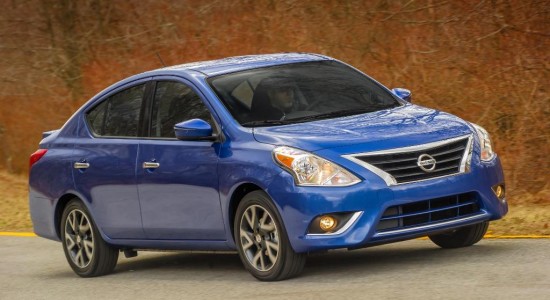 Most prominent of the changes is the bold new front end treatment anchored by larger headlights, a more substantial looking fascia and standard chrome plating on the grille – all of which strengthen the family ties of the Versa Sedan with the Nissan stable mates – Sentra, Altima and Maxima. The list of exterior upgrades also includes a new fog light finisher design, new side mirror designs for SV and SL trim levels (with integrated turn signals for SL), and a more dynamic rear fascia design. A new, Versa Sedan-exclusive 15-inch V-spoke aluminum-alloy wheel design is also available with SV models.

The 2015 Versa Sedan utilizes Nissan’s global lightweight “V” platform and is powered by a 1.6-liter HR16DE 4-cylinder engine rated at 109 horsepower at 6,000 rpm and 107 lb-ft of torque at 4,400 rpm. The 1.6-liter engine is matched with a choice of three transmissions – a 5-speed manual transmission or 4-speed automatic (S models only), or a next-generation Xtronic transmission with D-mode step shift programming.

The new Versa Sedan will make its debut at the New York International Auto Show.