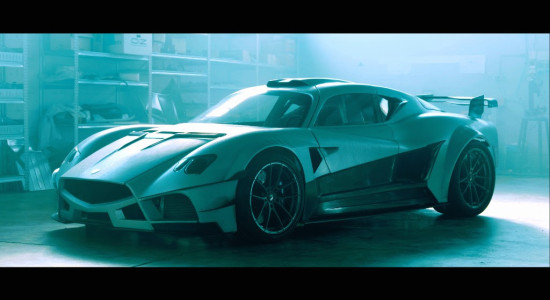 It is the most powerful street-legal Hypercar ever built in Italy and shows all the expertise of Mazzanti Automobili’s team, that perfectly reached this ambitious goal. The name “Millecavalli” refers to the power of 1000 hp. This datum completes the information revealed in the previous video: a new 7.2 liter V8 bi-turbo engine, capable of more than 1200 Nm of torque, able to destroy the 0 to 60 mph in 2.7 seconds.

Luca Mazzanti will show his new project as World Premiere at Salone Auto Torino – Parco Valentino 2016 from the 8th to the 12th June, to all car enthusiasts.
“All cars realized in the history of Mazzanti Automobili have in common the philosophy of exclusivity and craftsmanship, already part of the DNA of my Atelier” Luca Mazzanti affirms “and Evantra Millecavalli is the maximum expression of this, built in a limited edition of only 25 exemplars. With this ultimate Hypercar we were able to go beyond what few years ago were the limits we had reached. When the performances are so important, nothing is left to chance, but each element is the result of the meticulous work of people with great expertise and a true passion. Thus, Evantra Millecavalli embodies a concept of evolution with regard to the chassis and the style, and a concept of revolution concerning the mechanics and the aerodynamics.“