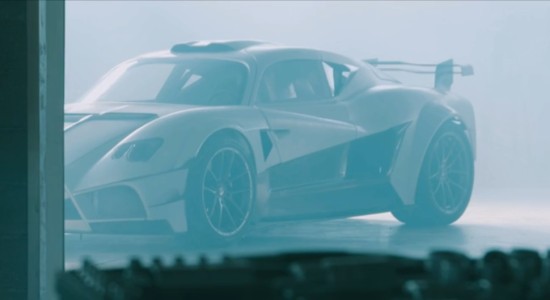 Mazzanti Automobili released the ninth of ten teaser videos of the EV-R Project. It is the first time we have a glimpse of the complete design of the new car coming soon from the Tuscany based supercar manufacturer.

The Hypercar of Luca Mazzanti will be the first street-legal car ever to use the technology of altering the airflow over the rear wing “Ala Soffiata”. Now only the last of the ten episodes is missing and then, this extreme version of the Evantra will be presented at Salone Auto Torino – Parco Valentino in World Premiere. To increase the performances of the new 7.2 liter V8 bi-turbo engine, capable of 2,7 seconds from 0 to 100 and reaching 400 km/h, developing more than 1200 Nm of torque, a new “Ala Soffiata” system to direct the airflow over the rear wing, was applied, thanks to the technologies used in aeronautics and in Formula 1.

Mazzanti Automobili revealed almost entirely the technical data of the new Hypercar “EV-R”, which keeps up to the artisanal and tailor-made traditions: distinctive traits of the Tuscan Supercar and Hypercar manufacturer since its foundation, almost fifteen years ago.

Watch the video below!