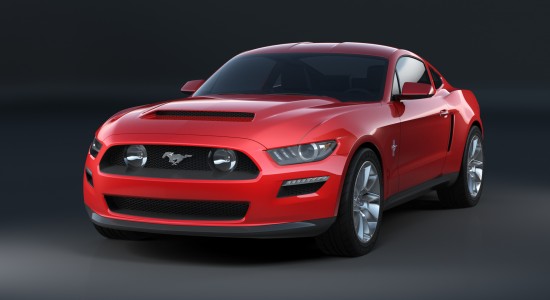 For a car designer, the chance to reimagine an icon like Ford Mustang is always exciting. Doing this for the famous Ford performance car’s 50th anniversary is the opportunity of a lifetime.

By mid-2009, with the substantially updated fifth-generation Ford Mustang in production, Ford designers, engineers and marketers turned their collective attention to what would come next: the design that would mark more than five decades of continuous Mustang development and production.

By the summer of 2012-as with all previous generations the main Dearborn, Michigan, studio took the lead on developing the Mustang into a production car.

Designers, clay sculptors and digital modelers spent countless hours refining the lines and surfaces that create the three dimensional body side and the powerful hunches as well as the long-sculpted hood with a forward leaning nose that give the 2015 Mustang its unique look and personality.

Details such as the shape and size of the grille and headlamps were refined and the rear track was widened by 70mm, giving the new car an even more aggressive stance.

The elimination of the front and rear bumper shelves and the use of unified side glass with the B-pillar hidden behind the rear quarter windows contribute to the new Mustang’s more contemporary shape.

On the interior, the team paid close attention to the relationships of the various elements, and designed them in a way to achieve optimum fit and finish. The final theme was inspired by the wing of an airplane, with the double brow carved out of the wing. All the gauges, registers, toggle switches and other design elements are placed into the wing.

The designers have also taken advantage of modern lighting technology at both ends of the car. Indirect LEDs illuminate the blade style tri-bar taillamps with a uniform glow. LEDs are also used for the three gills mounted inboard of the high-intensity discharge headlamps, recalling the gills molded into the headlamp buckets of the original 1965 Mustang. Peugeot tests 2008 DKR ahead of Dakar