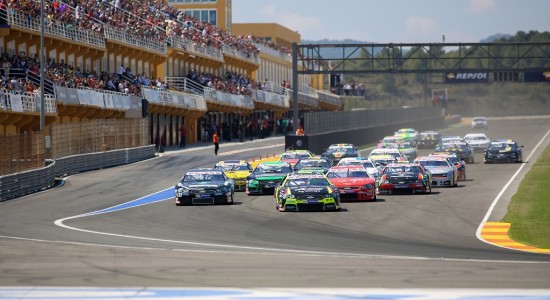 The first edition of the Valencia NASCAR Fest opened the 2014 NASCAR Whelen Euro Series season with a great success, both on and off the track, thanks to the incredible competition and to the over 14.000 Spanish fans that crowded the Circuit Ricardo Tormo to enjoy the atmosphere of a NASCAR weekend that was unique from many points of view.

“It has been a great weekend. 14 000 fans visited the circuit during Saturday and Sunday and that is a very large crowd, but the most important thing is the quality of the show. They are all looking forward to next year’s Valencia NASCAR fest second edition” said Gonzalo Gobert, director of the Circuit Ricardo Tormo.

The official NASCAR series in Europe enjoyed a huge step in terms of competition thanks to the arrival of new highly-professional international teams and drivers that challenged the established ones: on Saturday morning, at the end of a tense 15-minutes ELITE 1 qualifying session, PK Carsport monopolized the front row with Bert Longin (#11 PK Carsport Chevrolet SS) and Anthony Kumpen (#24 PK Carsport Chevrolet SS), but the top-5 drivers were separated by less than 2 tenths of a second and the first eleven cars were all in the same second, testifying how tight the battle for the pole position was.

And the four races of the Spanish weekend were even more exciting! A huge 28-car field, with drivers from all over the world, stormed on the front straight when the safety car pulled-in for the rolling start.

The 4 sprint races that highlighted the Valencia NASCAR Fest were equally split between TFT and PK Carsport. Yann Zimmer (#3 TFT-Moser Vernet Ford Mustang) and Ander Vilarino (#2 TFT-Banco Santander Chevrolet SS), both veterans of the series, won the two ELITE 1 for the Nogaro(France)-based team, one with an incredible late race double-overtake between turn 1 and 2 on Longin and Kumpen and the other with a wire-to-wire rush to the checkered flag ahead of the local hero Borja Garcia (#1 Ford Autolix Competition Ford Mustang), while 17-year-old rookie Neal Vaerenbergh (#11 PK Carsport Chevrolet SS) conquered both the ELITE 2 races.

The NASCAR Whelen Euro Series leaves Valencia with very close standings in both divisions and heads to Brands Hatch for the second edition of the American Speedfest, which will take place on June 7-8 on the legendary English circuit.