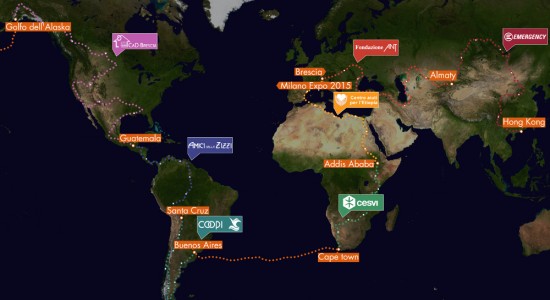 7milamiglialontano “Around the World” is the third stage of a journey started in 2009 and continued in 2012. It’s not just an adventure, a showdown or an organizational challenge, it is also an original way of looking at the world.

Split into seven different stages, 7milamiglialontano “Around the World” is a world tour that will begin on June 15 from Italy, a journey of more than 7 thousand miles where 7 different crews will drive GREAT WALL off-road cars. The team will be back in Italy in May 2015. The purpose of the adventure is to raise funds for several charity organizations.

A year-long commitment awaits the participants, an inspired journey aroused by the will of meeting new realities and directed to humanitarian aid and raising of ethics, aesthetics and consciousness in travelling as well as the ecological awareness of the environment.

CARS GLOBALMAG is thrilled to be Official Media Partner of the event and will follow the entire tour. Her are the stages of 7milamiglialontano “Around the World”: