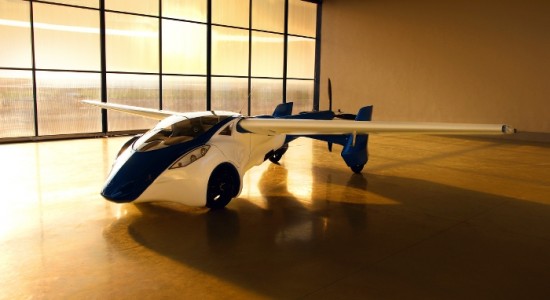 The AeroMobil is a stunning prototype of a flying roadster which metamorphoses into a two-seater light sport plane.

Automotive pioneer Henry Ford famously predicted that it was only a matter of time before a flying car was invented. “Mark my words,” he said in the 1940s, “a combined airplane and motorcar is coming. You may smile, but it will come.” It seems that time has come! From April 16 to 19th 2015 the AeroMobil will be on show at Top Marques Monaco, the world’s most exclusive supercar show.

The flying car prototype AeroMobil 3.0, which is expected to be issued with its full airworthiness license within weeks, can reach speeds of up to 160 km/h on the road and once sky-bound, accelerates to 200 km/h.

This ultimate two-seater prototype is an exquisite feat of design and engineering which runs on regular fuel and has a range of 800km. It can take off from speeds of about 100 km/h, meaning that owners can use any legal leveled grass surface to get their luxury transport airborne.

AeroMobil 3.0 prototype has been designed and manufactured by engineers led by chief designer and CTO Stefan Klein and CEO Juraj Vaculik, co-founders of the company AeroMobil.

Juraj Vaculik said: “I’m very excited by the opportunity to be a part of the Top Marques Monaco 2015 where we will introduce the prototype of AeroMobil 3.0 to supercar buyers. I strongly believe that AeroMobil will inspire new ways of thinking about personal travel. Our company is set to reinvent the flying car without constraints and deliver excitement through unique technical solution and design.”