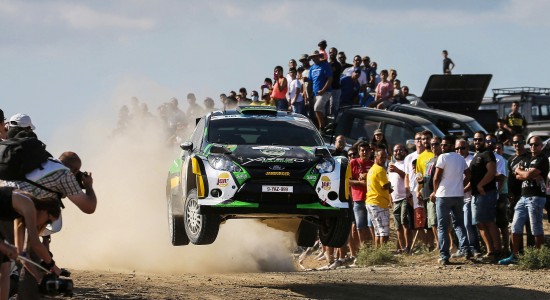 Yazeed Al-Rajhi (Ford Fiesta) has claimed a debut victory in the FIA European Rally Championship to become the eighth different winner of the all-action ERC season.

By finishing second on the CNP Asfalistiki Cyprus Rally, Kajetan Kajetanowicz (also driving a Ford Fiesta) is one of four drivers still firmly in contention for the coveted regional title with two rounds remaining. Kajetanowicz, whose performance makes him the inaugural ERC Gravel Master, was also chosen as the recipient of the Colin McRae ERC Flat Out Trophy.

Co-driven by Northern Irishman Michael Orr, Al-Rajhi started Sunday’s closing six stages 3.8s down on Kajetanowicz in second place having lost ground with a broken rear anti-roll bar on Saturday’s penultimate stage. He was ahead at the completion of the day’s opening all-gravel run. And the Saudi ace extended his advantage over Kajetanowicz to 4.1s on the next stage. But the decisive moment came on stage 12 when Al-Rajhi went a full 31.5s faster than his rival to all but seal victory in his Ford Fiesta RRC as a power issue slowed Kajetanowicz.

“We come 12,000 kilometres [from Rally Australia] for this rally and we come to win and not to play,” said Al-Rajhi. “We did a good job, everything was under control and for us this is a big win after a good fight with Kajetanowicz.”