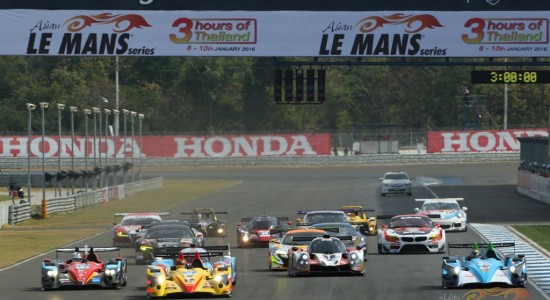 Sean Gelael and Antonio Giovinazzi have taken the win at the third round of the Asian Le Mans Series, in the #9 Jagonya Ayam with Eurasia Oreca 03R Nissan, held at the Chang International Circuit in Buriram, Thailand. Not far behind them over the line was the #25 Algarve Pro Racing Ligier JSP2 who came second. The #8 Race Performance Oreca 03R Judd took third place on the podium.

After a great start in the #9 Jagonya Ayam with Eurasia Oreca 03R Nissan, Sean Gelael suffered a puncture in the left rear tyre, forcing him to pit and fall to the back of the field. After 30 minutes, he had managed to climb back and rejoin the LMP2s, which had been led by Nick de Bruijn in the #99 Eurasia Motorsport Oreca 03R Nissan. De Bruijn had himself taken a great start, from 4th into 2nd on the first lap. As the race went on, the leaders shuffled around, between the #9, the #99 and the #8 each leading for a number of laps. In the second hour Gelael reclaimed the lead and his teammate Antonio Giovinazzi kept it there until the end.

In LMP3, the DC Racing trio of Ho-Pin Tung, Thomas Laurent and David Cheng took their third consecutive class win in their #1 Ligier JSP3. This win also gives them the LMP3 title for the 2015-16 edition of the Asian Le Mans Series. This also means that DC Racing is automatically selected for the 24hrs of Le Mans this year in the LMP2 class. 2nd place in LMP3 went to the #89 Team AAI ADESS 03, driven by local Tanart Sathienthirakul, along with Masataka Yanagida and Sakaguchi Ryohei. The 3rd LMP3 entry this weekend, the #88 Team AAI ADESS 03, could not take part following yesterday’s crash during qualifying.

It was hard to tell who would come out on top of the busiest class of the Series, the GT class. In the end, the #27 Nexus Infinity Ferrari 458 GT3 crossed the finishing line first. It’s the first podium for the team, with Joshua Hunt and Dominic Ang sharing the wheel. They crossed the line 7,6 seconds ahead of the #5 Absolute Racing Audi R8 GT3, which was driven by Jeffrey Lee, Alessio Picariello and Adderly Fong. Third place went to the #91 Team AAI BMW Z4 GT3, the second podium of the season for the car, this time driven by Junsan Chen, Nobuteru Tanaguchi and Ollie Millroy.

It has been a successful weekend for the series, with record attendance and which sees two of the classes with champions already. Here’s to our final round in Sepang in two weeks time!