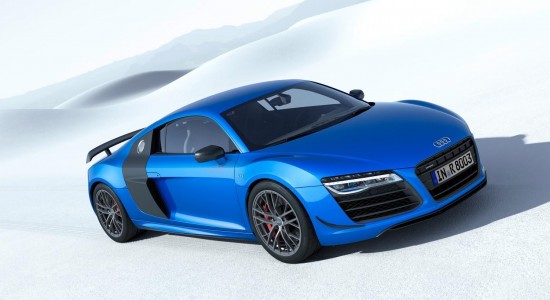 A new limited edition LMX version of the Audi R8 will be the most powerful roadgoing Audi sports car ever made and the first production car to adopt laser high beam lighting as standard. The new 570PS, 198mph R8 LMX will make its debut at the Goodwood Festival of Speed and will become available to order at the same time priced from £160,025 in the UK (around 193,000 Euros).

The Audi R8 LMX is based on the V10 plus model with its high-revving, mid mounted ten-cylinder engine, double wishbone suspension and ASF (Audi Space Frame) aluminium body. It will be available exclusively as a coupe with a production run limited to 99 vehicles, and with 540 Nm of torque to complement its 570PS output will be capable of reaching 62mph from rest in just 3.4 seconds before topping out at 198mph.

With the new laser high beams, one laser module per headlight generates a cone of light with twice the range of the all-LED headlight. Each module comprises four high-power laser diodes. With a diameter of just 300 micrometers, these generate a blue laser beam with a wavelength of 450 nanometers. A phosphor converter transforms this into roadworthy white light with a colour temperature of 5,500 Kelvin – ideal conditions for the human eye that enable the driver to recognise contrast more easily and help prevent fatigue. The laser spot, which is active at speeds of 37mph and above, supplements the LED high beam in the R8 LMX and greatly enhances visibility and safety. An intelligent camera-based sensor system detects other road users and actively adjusts the light pattern to avoid dazzle.