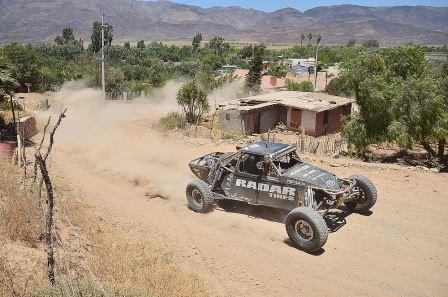 Tens of thousands of spectators lined the route and the start and finish of the Baja 500 to cheer on their favorite drivers and riders in an event that has become a must. This year, they were cheering for the first time for an unusual machine, an Iveco truck from Holland driven by the mercurial Gerard De Rooy. Winner of the 2013 Dakar and the first to challenge the American Pro-Trucks on their home ground at the wheel of a truck, he also took a gamble by lining up at the start just one week after an operation for appendicitis. Impatient to fulfil a dream he had been nursing for two years, De Rooy took a risk on the dusty, bumpy and sometimes winding tracks in this legendary event. Exhausted after two hours’ effort, pain and even vomiting, the first truck racer of the Baja 500 finally decided to give up before reaching the finish.

After De Rooy’s demonstration, the Dakar was once again very present thanks to the winners of the second leg of the Dakar Challenge. Mike Johnson pulled off the big coup by winning in his buggy class 10 to earn his place in the Dakar. The American, who showed himself capable of clearly beating local hero Gus Vildasola, could be a likely challenger in the solo category next January.