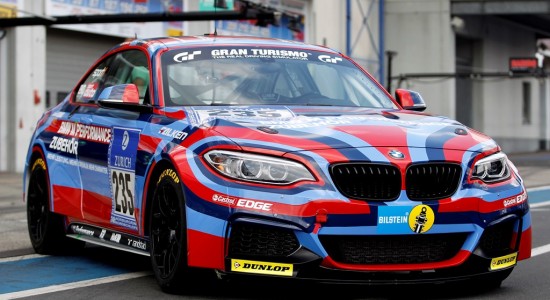 The BMW Motorsport design team has given the BMW M235i Racing an eye-catching look, reminiscent of the famous Art Cars of former years, for the race in the Eifel Mountains.

Among those in action at the wheel of the works-assisted car will be two motorsport journalists Marcus Schurig (DE) and Jethro Bovingdon (GB). They will be supported over the course of the marathon venture by BMW Motorsport Junior Alexander Mies (DE) and former MotoGP rider Alex Hofmann (DE).

“I am delighted we will get to see this model at the 24-hour race, as well as the many BMW M235i Racings fielded by our privateer teams,” said BMW Motorsport Director Jens Marquardt. “The livery on this special BMW M235i Racing is fantastic. I must pay a huge compliment to the staff in the Design department. With almost 50 cars in the field, the variety of BMW racing cars at the Nürburgring-Nordschleife is once again mighty impressive in 2014. However, this particular car adds a very special splash of colour and I am certain it will go down well with the fans.”