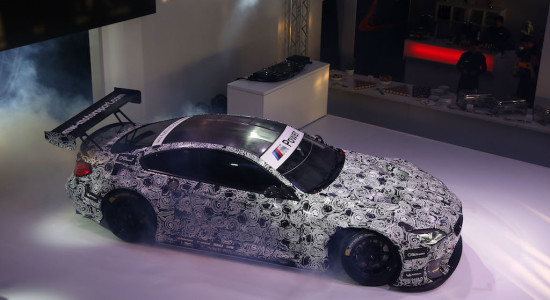 BMW Motorsport customers from all over the world had previously enjoyed a first exclusive look at the BMW M6 GT3 at a “Closed Room” event at the BMW M Test Centre in Nürburg on Wednesday, during which they were given a detailed introduction to the car by drivers and engineers. The guests were particularly interested in the 4.4-litre V8 engine with M TwinPower Turbo technology, which is also used in the BMW M6 Coupé and was only slightly modified for its outings on the racetrack. The high-tech powertrain with dry sump lubrication generates 500 hp and impressively high torque.

The BMW M6 GT3 weighs less than 1,300 kilograms. The transaxle drive concept, six-speed sequential racing transmission and chassis, which was optimised in the BMW wind tunnel, ensure that BMW Motorsport will compete with a genuine racer in 2016. The reliability, efficiency and ease of maintenance of the BMW M6 GT3 have also been optimised for its outings at endurance races. The longer wheelbase significantly improves the car’s handling compared to the current BMW Z4 GT3.