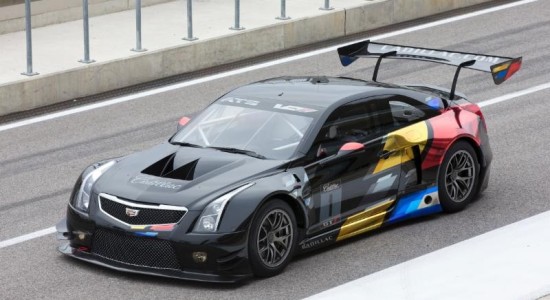 Cadillac Racing is ready to debut the all-new Cadillac ATS-V.R race car in the opening round of the Pirelli World Challenge Series at the Circuit of the America’s in Austin, Texas, March 6-8.

The ATS-V.R is the racing extension of the upcoming 2016 Cadillac ATS-V Coupe.

New to the program is the revolutionary twin turbocharged V6 LF4 engine. The race version, named LF4.R developed by GM Powertrain, has received race specific modifications to meet the demands of the FIA GT3 specification. Throughout the 24 month development cycle, which used the already performance built ATS-V Coupe as the baseline, the team took answers from computer simulations, data from the previous generation CTS-V.R and the latest in racing technology to create the ATS-V.R.

“We are still learning about the ATS-V.R,” said Johnny O’Connell driver of the no.3 car. “It has a very nice and direct turn down to the apex. Which is a natural evolution over the CTS-V.R. You also don’t notice the mass as much. The downforce from the FIA GT3 parts gives you a little bit more confidence with the car in the faster corners. Developing a new car is always challenging, especially when you combine the development of a new engine as well. The engines definitely have different characteristics when comparing the last generation V8 to the twin turbo V6.”