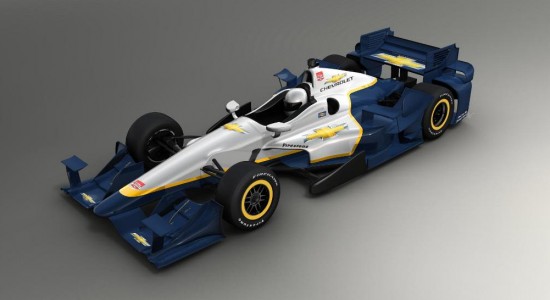 Chevrolet introduced the road course/short oval body design at the Indianapolis Motor Speedway. It is distinguished from the previous racecar with new front wing elements, sculpted side pods and a new rear wing. A speedway configuration for the aero kit, designed for high-speed ovals, will be introduced ahead of its competitive debut at Indianapolis in May.

“This is an important milestone in Chevrolet’s involvement in IndyCar racing,” said Jim Campbell, General Motors U.S. vice president of Performance Vehicles and Motorsports. “We focused on developing an aerodynamic package that delivers an balanced combination of downforce and drag, along with integrated engine performance. It’s a total performance package.”

The road course configuration’s changes over the 2014 DW12 aero package are easily identified by major components, including: front wing that features new pedestal-mounted “front uppers” toward the outer edges; new sculpted “wheel wedges” in front of the rear tires; an engine cover and side pods that have more compact shapes, achieved through a revised turbocharger and exhaust system layout; new larger rear bumper pods; a multi-element upper rear wing, along with louvered end plates.