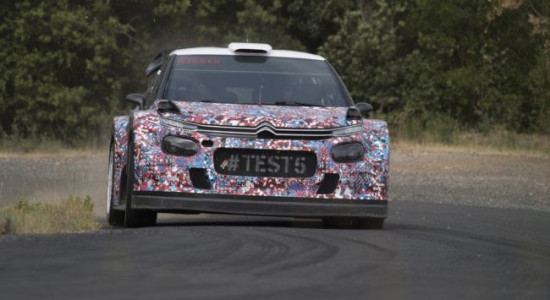 Three months after its first outing, Citroën Racing’s World Rally Car 2017 has made its asphalt début. On the bumpy roads of Aude in southern France, Kris Meeke and Stéphane Lefebvre learned how the car behaves on the surface.

By opting to hold the first development sessions on gravel, the Citroën Racing engineers had given priority to a surface used in the majority of World Rally Championship events. “By test-driving the car in the toughest conditions first, we were able to check the reliability of all the components,” explained Citroën Racing Technical Director Laurent Fregosi. “What is more, there isn’t just one type of gravel. Finland and Mexico offer completely different surfaces. So we wanted to explore that diversity by testing the car on asphalt, where the operating window is narrower.”

In terms of the regulations, the differences between a WRC’s gravel and asphalt setups are minimal, but they are vital. “The biggest change is in the suspension,” Fregosi continued. “We use lighter parts that allow us to reduce the ground clearance. The drivetrain kinematics are also adapted to the 18″ wheels. Large wheels mean we can increase brake disc diameter and use water-cooled callipers. We should also mention the lighter body protection. On the aerodynamic front, we now have the ability to adapt the lower part of the front bumper specifically for asphalt.”

“It’s exciting to be driving the WRC on asphalt for the first time,” said Kris Meeke. “Citroën Racing has always made really good cars for this surface and I think this will be no exception! On tarmac, you can really feel the changes introduced as a result of the new regulations, such as the higher power, the increased width, the power of the brakes… We are continuing the programme as planned and each run teaches us a little bit more. Every phase of the project is just as exciting as the last!”

Now with two dedicated chassis for development tests, Citroën Racing will be intensifying its testing programme over the next few weeks. On gravel and asphalt alike, the engineers and drivers are focused on their main objective: Rallye Monte-Carlo on 16 January 2017!