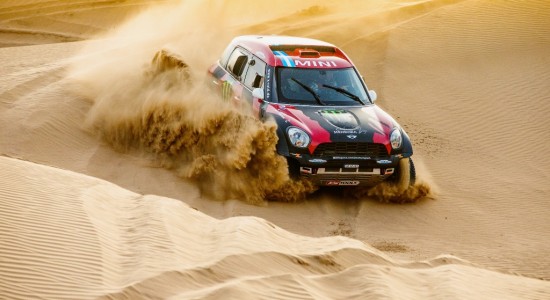 A total of 406 vehicles (161 motorcycles, 45 quads, 137 cars and 63 trucks) have been cleared to start the 37th edition of the race. A fearsome battle for the four titles at stake looms, especially in the two queen categories cars and motorcycles.

The Dakar 2015 starts today and will take the competitors on a 9,300 km quest on the tracks, sand and rocks of Argentina, Chile and Bolivia. Peugeot, which is fielding three DKRs 2008 driven by Stéphane Peterhansel, Carlos Sainz and Cyril Despres, a five-time motorcycle champion making his debut in the car category, bared its teeth, but only a little. “Mister Dakar” Peterhansel hailed a new era, whereas “El Matador” Sainz, a dyed-in-the-wool perfectionist, talked of a test edition.

Mini is also flying under the radar with its eleven-strong formation, including a buggy driven by comeback kid Chicherit. While leader Nani Roma quietly pointed out that “The year just flew by! It feels like Valparaíso was yesterday… “, it was his humility that really shone through. “We’re starting from scratch”, he explained this morning, as teammate Nasser Al-Attiyah got ready to wipe the slate clean. However, there is much more to the car category than the clash of these two titans. Behind their eagerly awaited duel, the prudent, talented Giniel De Villers hopes to make good on the promise he showed in his Toyota last year, while Gache’s three buggies will be worth keeping an eye on. The car category looks increasingly like a gallery of evolution. Buggies are increasing their presence, as shown by the return of the prodigal son Guerlain Chicherit, invited by Sven Quandt himself. “My mission’s to go further than the Peugeots”, he explained. The buggies’ battle for dominance is on. And it will be fearsome.

1939 Cadillac LaSalle among cars donated by celebrities for charity