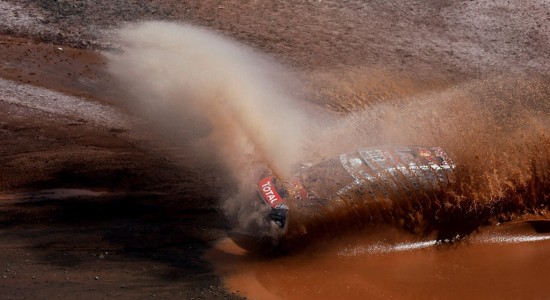 289 vehicles made it to the 2016 Dakar’s rest day in Salta (112 motorcycles, 36 quads, 90 cars and 51 trucks, amounting to 83% of all starters). Peugeot smashed everyone’s expectations, especially with freshman (yes he’s a freshman in the Dakar) Sébastien Loeb, who holds the lead halfway through the race ahead of teammates Stéphane Peterhansel and Carlos Sainz.

“It’s simple, there are three competitions: the Peugeot race, our race, in which we are alone, and the race of everyone else, far behind!” Matthieu Baumel’s analysis may be concise, but it gets the point considering the results of the first six stages since the start in Buenos Aires. In just one week, the confidence and assurance of Nasser Al-Attiyah and his co-driver, which were sky-high after an extraordinary 2015 season, were torn apart by the claws of the three lions racing in front. “I’m attacking more than ever, but I’m losing three or four minutes every day”, says the defending champion bitterly. “All I’ve got left now is the fight for the podium.”

Halfway through the race, all podium spots are in the hands of Peugeot. The spoils are piling up, with only the prologue escaping the 2008 DKR cars, which have taken two thirds of all top 3 spots so far (14/21).