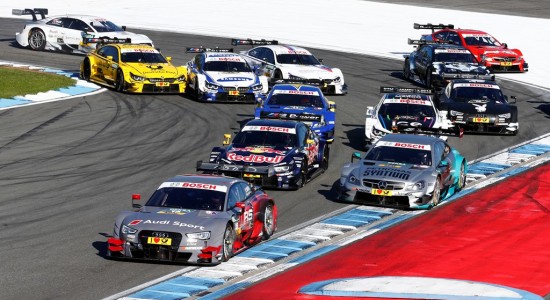 With the ‘DTM-Festival’ at the Hockenheimring, the most popular international touring-car series kicks off its new season. From 30 April to 3 May, the motor-racing enthusiasts will be provided a truly outstanding four-day motor-racing event. In addition to the new two-race DTM format, the visitors also may look forward to a lot of additional action and activities on and aloof from the track.

DTM has been subjected to a major revamp: in the run-up to the season kick-off of the hard-fought series, the doubled number of races and new regulations promise to make for clearly more excitement, this year. A 40-minute race on Saturday will be added to the one-hour race on Sunday and while a pit stop for a set of tyres is obligatory on Sunday, the drivers may complete the Saturday round on one set of tyres. In addition, the DRS regulations also were revised to allow for more overtaking manoeuvres: with immediate effect, the drivers may tilt their rear wings down for achieving a higher top speed three times per lap.

Only those who succeed in coping well with all the innovations will have the chance of winning the 2015 title. One of the favourites definitely is defending champion Marco Wittmann who underlined his title ambitions with competitive performances in the pre-season tests. Nonetheless, the Audi and Mercedes-Benz camps also are in great shape – and they are determined to strike back, this year.