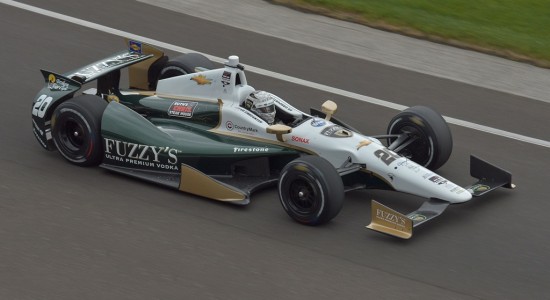 The owner/driver of the No. 20 Fuzzy’s Vodka/Ed Carpenter Racing Chevrolet was the final qualifier May 18 and recorded a four-lap average of 231.067 mph to bump James Hinchcliffe from the top spot and claim the $100,000 Verizon P1 Award for the 98th Running of the Indianapolis 500.

Carpenter is the 11th driver to earn back-to-back poles for the Indianapolis 500 — the most recent Helio Castroneves in 2009-10. Carpenter’s four-lap average was the fastest since 2003, when Castroneves won the pole (231.725 mph) and was the race runner-up.

“It’s awesome to do this two years in a row; I was surprised last year and didn’t expect to do it this year with such deep competition. It’s exciting, but after going through this last year and not winning the race I’ve been so much more determined,” said Carpenter, who led 37 laps but finished 10th. “Now it’s all about the race, and we want to close the deal.”

Will Power will complete the first row starting on the outside.