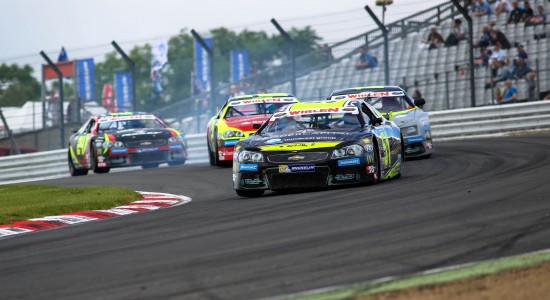 The thousands of fans gathered at Brands Hatch for the second edition of the American SpeedFest enjoyed an astounding performances during the weekend.

Eddie Cheever III (#51 CAAL Racing Chevrolet SS) led all the laps of a hard-fought ELITE 1 Saturday race, conquering his first NASCAR Whelen Euro Series win and the first victory for an Italian driver in a NASCAR sanctioned race. The 21-year old smartly defended his lead from the attacks brought by Frederic Gabillon (#12 Still Racing Chevrolet Camaro) and Ander Vilarino (#2 TFT-Banco Santander Chevrolet SS) in a race that showcased how close is the competition in the European NASCAR series in perfect short-track style.

In the Elite 2 Wilfried Boucenna (#33 Overdrive Chevrolet SS) swept the weekend by winning both races. The Frenchman took the lead in the Saturday race with a brilliant overtaking manoeuvre at Paddock Hill Bend on Maxime Dumarey on lap 15 (#24 PK Carsport Chevrolet SS), but on the last lap the two came to contact and Dumarey lost 3 positions. Rookies Denis Dupont (#32 RCP – Marc VDS Toyota Camry) and Thomas Ferrando (#22 Overdrive-Buffalo Chevrolet Camaro) took advantage of the situation to finish respectively second and third.

Boucenna closed the weekend in the best way with his second consecutive win, stretching his lead in the championship standings over his teammate Thomas Ferrando (#22 Overdrive-Buffalo Chevrolet Camaro), who crossed the finish line second. Marsilio Canuti (#77 DF-1 Racing by B66 Chevrolet Camaro) came back from the last place on the grid to finish third.

The next NASCAR Whelen Euro Series races will take at the Tours Speedway, the half-mile oval built in downtown Tours (France) on July 5 and 6.