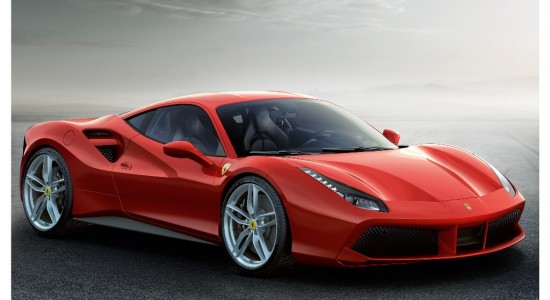 Forty years on from the unveiling of its first ever mid-rear-engined V8 model, the 308 GTB, the Prancing Horse opens a new chapter in its 8-cylinder history. The Ferrari 488 GTB provides track-level performance that can be enjoyed to the full even by non-professional drivers in everyday use.

The Ferrari 488 GTB’s new 3902 cc V8 turbo is at the top of its class for power output, torque and response times, making it the new benchmark for this kind of architecture. The engine unleashes 670 cv at 8,000 rpm along with 760 Nm of maximum torque in seventh gear and a response time to the accelerator of just 0.8 seconds at 2,000 rpm. These figures are sufficient to allow the Ferrari 488 GTB to accelerate from 0-200 km/h in an astonishing 8.3 seconds and, when combined with the radical innovations introduced on all aspects of the car’s performance, lap the Fiorano track in just 1’23”.

The car’s aerodynamics also made a pivotal contribution to performance: its 1.67 efficiency figure is a new record for a production Ferrari, and is the fruit of 50 per cent more downforce than the previous model and reduced drag.

Designed by the Ferrari Styling Centre, the new car features very sculptural flanks which are the key to its character. Its large signature air intake scallop is a nod to the original 308 GTB and is divided into two sections by a splitter. The wide front spoiler features a double profile to improve the thermal efficiency of the radiators positioned at the sides.

The Ferrari 488 GTB will make its world debut at the International Geneva Motor Show in March.