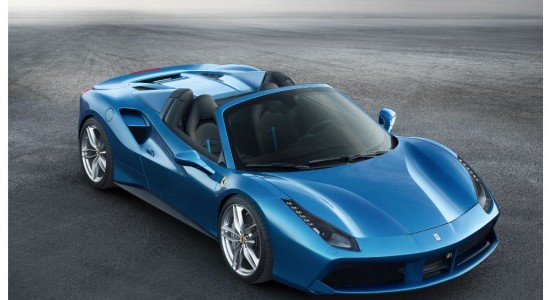 Today marks the official debut at the Frankfurt International Motor Show of the Ferrari 488 Spider.

It is the most high performance Spider ever built by Maranello and is powered by the 488 coupé’s 3902cc turbo-charged V8 which punches out a maximum of 670 CV with the Variable Torque Management system guaranteeing smooth, progressive torque delivery in the higher gears up to a maximum of 760 Nm at 3,000 rpm. Blistering acceleration (0 to 100 km/h in 3 seconds and 0 to 200 km/h in 8.7) and, even more significantly, a razor-sharp throttle response time of just 0.8 seconds which essentially eliminates the turbo lag typical of this kind of engine.

The 488 Spider uses the RHT (Retractable Hard Top) which debuted on the 458 Spider as world-first for such a solution on a mid-rear engined car.

The 488 Spider also debuts a new colour designed to enhance its forms: the Blu Corsa livery.