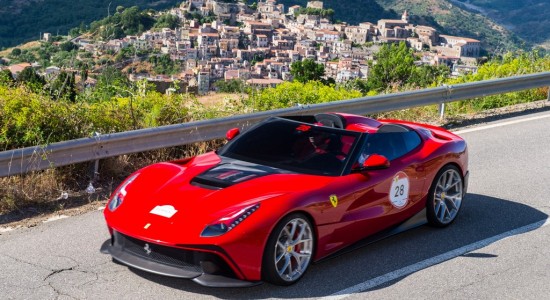 One of the 90 cars taking part in the third edition of the Ferrari Cavalcade was the F12 TRS, a one-off custom design making its public debut on Sicilian soil.

Based on the F12berlinetta, the car was developed at a client’s request as an extreme, two-seater, open-top sports barchetta. One of the initial inspirations for the project was the 1957 250 Testa Rossa. In fact, the F12 TRS is Flavio Manzoni and the Ferrari Style Centre team’s modern, innovative take on that legendary car’s spirit and pays homage to it in its moniker.

Like all one-off Ferraris, the F12 TRS is the product of Ferrari’s now-classic approach of creating a truly integrated design. It thus has the same exceptional performance figures as the F12berlinetta including 0-100 km/h acceleration in 3.1 s and 0-200 km/h acceleration in 8.1 s, thanks to the massive 740 cv and maximum torque of 690 Nm at 9,000 rpm unleashed by its 6262 cm3 V12 engine.

From the leading edge of the typically sharp Ferrari nose, aggressively sculpted forms flow back over the bonnet, while a low, wraparound windscreen forms a long dark band of glass in contrast to the car’s body. The V12 engine’s signature red cylinder heads are visible through a window in the engine lid, a concept inspired as much by the front-engined Ferrari sports cars of the 1950s as our more recent mid-engined berlinettas.

The design of the rear marks an evolution of the T-shaped graphic that characterises the F12’s truncated tail and is influenced to some extent by the cabin shape with long fuselage fairings running behind the headrests into the rear spoiler.