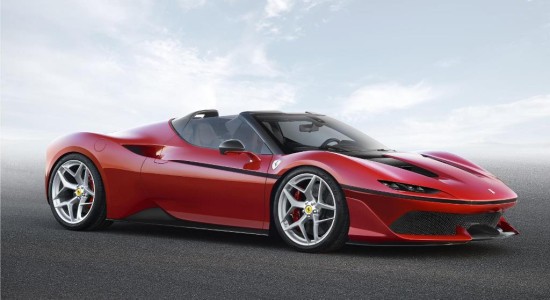 During a special celebration held at the National Art Center in Tokyo to commemorate the 50th anniversary of Ferrari in Japan, Ferrari revealed a new strictly limited series of bespoke cars, the J50.

The Ferrari J50 is a two-seater, mid-rear-engined roadster that marks a return to the targa body style evocative of several well-loved Ferrari road cars of the 1970s and 1980s. Created by Ferrari’s Special Projects department and designed by the Ferrari Styling Centre team in Maranello,  just 10 examples of the J50 will be built and, in the spirit of Ferrari’s fuori serie tradition, each one will be tailored specifically to the customer’s requirements.

Inside the cabin, specific trim adorns the sports seats, echoing the design of the rear bonnet contour to provide a unmistakable signature feature. The carbon-fibre hard targa top is divided into two pieces which stow conveniently behind the seats.

The J50 presented at the launch in Tokyo is finished in a special shade of three-layer red with a red-over-black interior trimmed in fine leather and Alcantara.