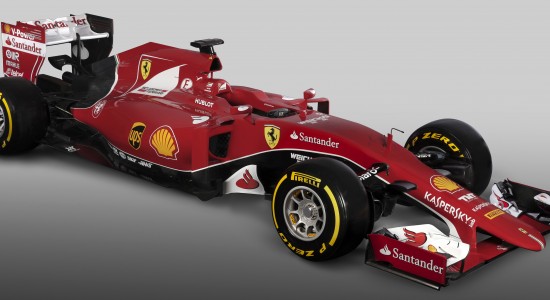 The SF15-T is the the sixty first car built by Ferrari specifically to take part in the Formula 1 World Championship. It is the second car made by Ferrari since the reintroduction of turbo engines in 2014.

The most striking visual difference between the SF15-T and its predecessor is the lowering of the front end of the car in accordance with the change of regulations for the 2015 season. After a few seasons of rather unappealing aesthetics, the 2015 rules permit the SF15-T an attractive nose shape which also brings excellent aerodynamic performance. Aside from the nose area, the regulations for 2015 are largely unchanged. A casual glance at the back of the car reveals a much more tightly packaged rear end which allows more downforce to be extracted from the critical surfaces around the rear of the car.

The choice of 8 forward gear ratios are fixed for the entire season once they are run in the first race. The regulations allow the weight of the car to increase by 11kg with respect to the 2014 car.