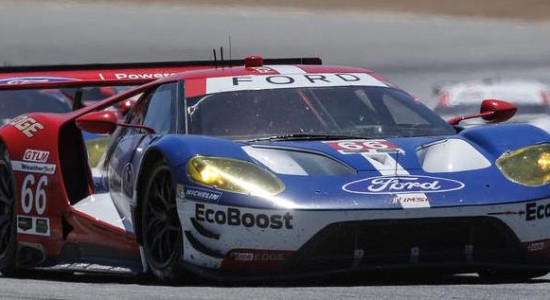 Ford broke through with a first-time win for the Ford GT at the Continental Monterey Grand Prix at Mazda Raceway Laguna Seca Sunday, but Ford wasn’t the car and the manufacturer most were expecting to own the day.

Practice and qualifying strongly suggested Mazda would finally break through with its first series win in Prototype, but that didn’t happen – it was a savvy drive by Ozz Negri and gentleman driver John Pew in the No. 60 Michael Shank Racing Honda-powered Ligier JS P2 that made it to the checkered flag a whopping 30.099 seconds over the second-place car, the No. 90 Visit Florida Chevrolet Daytona Prototype of Ryan Dalziel and Marc Goossens, in the car that won last year’s race in Monterey. Third was Eric Curran in the No. 31 Whelen Action Express Corvette DP he shares with Dane Cameron. Curran was just 0.855 seconds behind the No. 90.

In the GT Le Mans class – the Prototypes and GTLM cars were split into one race, the Prototype Challenge and GT Daytona cars into another due to pit lane capacity – the No. 67 Chip Ganassi Racing Ford GT took the win with drivers Ryan Briscoe and at the end, Richard Westbrook. Westbrook made it a stunning 52 laps on his last tank of fuel, nursing the car to the checkered flag on fumes. But saying it was entirely a fuel mileage victory isn’t fair – Ryan Briscoe’s best lap was only a split-second behind the fastest car, the second-place No. 68 Scuderia Corsa Ferrari of Daniel Serra and Alessandro Pier Guidi, which qualified on the pole, and the No. 4 Chevrolet Corvette C7.R. That Corvette of Oliver Gavin and Tommy Milner finished fourth, just behind the No. 912 Porsche North America Porsche 911 RSR of Earl Bamber and Frederic Makowiecki.