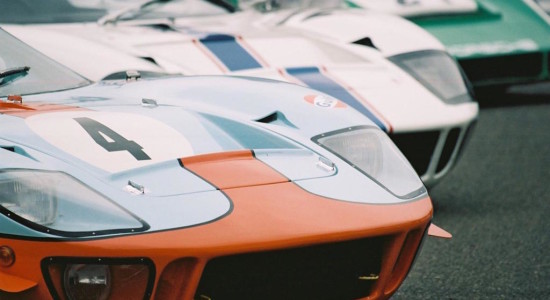 The extended age range for this year’s Le Mans Legend race has allowed seven Ford GT40s to join the spectacular, packed historic grid that will race on the full Le Mans circuit just a few hours before the start of the modern 24 Hours endurance event.

61 iconic cars, dating from 1949 to 1968 and representing 26 different marques, will take to the track in an outstanding live-action showcase covering two decades of motor racing history. 14 of the cars entered actually raced at Le Mans in period, and the remainder of the grid boast their own impressive competition histories.

The red GT40 of US drivers Philippe Mulacek and Alain Vinson took part in the 1967 Le Mans 24 Hours, Marc Doncieux’s GT40 raced there in 1966, and Claude Nahum/Bernard Thuner’s Mk 1 in 1968, with Eric Lidell replacing the car’s regular driver that season David Piper to share with Mike Salmon.

The remarkable seven-GT40 entry also includes the ex-Scuderia Bear/Essex Wire Corporation 1965 Mk1 which finished 3rd in the 1966 Sebring 12 Hours (Skip Scott/Peter Revson) and was put out of the 1966 Le Mans 24 Hours when it was struck by a works-entry GT40 during qualifying. Present-day renowned GT3 and historic racer Andrew Smith will share the car with James Cottingham.

Another newcomer that the extended age range admits to the Le Mans Legend grid is the Alpine-Renault A220 of French drivers Sylvain Stepak and Jean Luc Blanchemain.

The A220 and the seven GT40s are joined in what promises to be a stunning class battle by Rainer Becker’s Porsche 910 – again, a new addition to the grid.