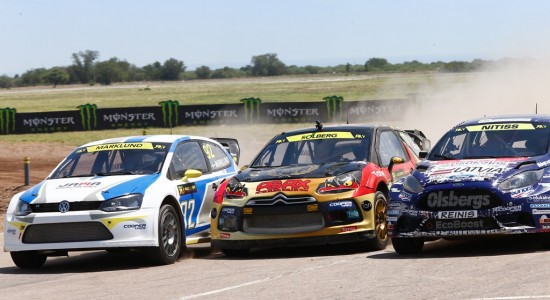 Solberg’s win in Argentina is the Norwegian’s fifth outright victory of the year for the PSRX Team and sees the driver end the inaugural World RX season with a total of 267 points. Volkswagen Marklund Motorsport’s Topi Heikkinen amassed enough points today to award the 23-year-old Finn the coveted runners-up spot. Nitiss ends the season third overall in points.

“This is a dream come true. We started the season with a win in Portugal, and to finish with another win in Argentina feels really amazing,” grinned Solberg.

There was a three-way battle for the Teams’ Championship going into Argentina with Volkswagen Marklund Motorsport, Ford Olsbergs MSE and Team Peugeot-Hansen all still capable of winning the accolade. Peugeot-Hansen was knocked out of winning contention when Timmy Hansen and Timur Timerzyanov failed to score enough points at the Intermediate Classification stage. Tension mounted further when Topi Heikkinen’s engine failed in heat four and VW Marklund were forced to repair the Polo RX Supercar before the semis.

A fraught two semi-finals were to follow, but the Ford squad sealed the silverware when Anton Marklund was denied a spot in the final and both Ford team-mates went through. “I am so proud of my team – to win this trophy with Olsbergs who have worked so hard all year is such a good feeling,” beamed 18-year-old Nitiss.