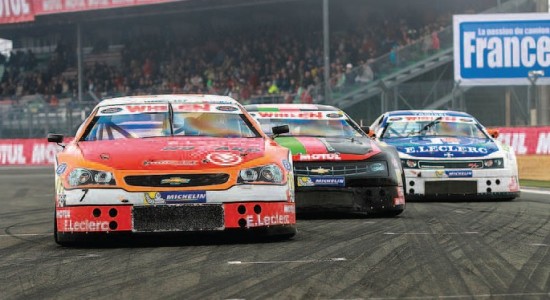 Two years after hosting the first-ever NASCAR race on an European oval track and one year after hosting the debut of the freshly-branded NASCAR Whelen Euro Series, Tours Speedway is ready to write history once again, thanks to the addition of a second 9-degree banking in turn 1 and 2.

On July 5th and 6th the Speedway, built in downtown Tours (37, France) by Tours Evenements, Team FJ and the city of Tours, will be the place for European race fans, when the 400hp race cars will take center stage for a weekend that is unanimously considered as the most important of the season, the “Daytona 500” of the European NASCAR championship.

“Everybody worked really hard on this track project and we feel very lucky to have such great partner in Tours Evenements. Now we have a true NASCAR Oval racetrack, the first ever in Europe. Tours Speedway will be the place to be on July 5th and 6th for every European race-fan to attend breathtaking races”, said Jerome Galpin, NASCAR Whelen Euro Series President-CEO.

The new layout brings the track’s length up to almost 1/2 mile, a characteristic that pairs with the 9° (or 16%) banking of the four turns, similar to the legendary Indianapolis Motor Speedway. This unique configuration will surely offer a great show to each and every one of the thousands of race fans that will crowd the grandstands. A show that only a true NASCAR short-track can offer, made of close racing, daring overtakes, door-to-door battles and thundering double-file restarts.

The four 75-lap races – The ELITE 1 Knauf 75 and The ELITE 2 Whelen 75 on Saturday, The ELITE 1 Michelin 75 and the ELITE 2 Tours Evenements 75 on Sunday – will take place in the contest of the eighth edition of the American Tours Festival, a unique three-day event entirely dedicated to the American culture and highlighted by country music and rock concerts, custom bike exhibitions, line dance shows and cowboy animation.

The new banking under construction at Tours Speedway