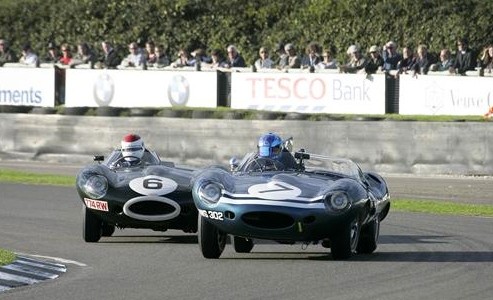 The Goodwood Revival Meeting, takes place from 12-14 September and once again, there will be plenty of 1940s, ‘50s and ‘60s icons for all to see on the track. The top 10 highlights announced so far are:

West Sussex at War, commemorating 75 years since Goodwood Motor Circuit became an RAF base, with a 600-vehicle and personnel parade and flypast featuring two Lancaster bombers.

60 years of the Jaguar D-type with one of the largest gatherings of D-types in the world including the Lavant Cup, to feature 23 of them, and a pair of parades with a staggering 33 machines. Sixty years of the small-block V8 engine, celebrated by the Shelby Cup for pre-1966 saloons powered by the unit, and featuring Marussia F1 racer Max Chilton and 20 Ford Mustangs to mark the car’s 50th anniversary.

Fifty years since Sir Jackie Stewart was ‘discovered’ driving at Goodwood, celebrated with a parade on each day of 23 of his competition cars – including the Cooper F3 car he first drove at Goodwood in 1964.

Fifty years since the Order of the Bards, Ovates and Druids with a life-size Stonehenge installation

Fifty years since the summer of ’64 saw the Mods and Rockers duking it out at seaside resorts across the south coast of England, with a Brighton Pier installation and a Friday morning parade, led by Quadrophenia star Phil Daniels.