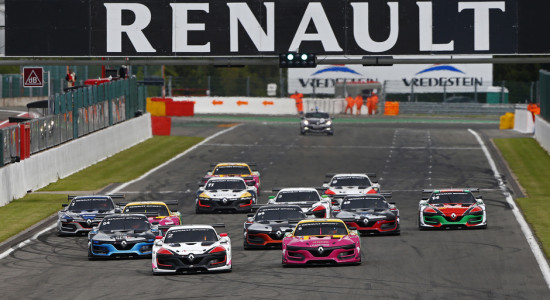 Belgium is an indispensable stop for the World Series by Renault and it hosted the second meeting of the season at Circuit de Spa-Francorchamps. 74, 000 spectators came out to watch the first races for the all-new Renault Sport Trophy won by the Italian duo of David Fumanelli and Dario Capitanio, as well as the triumphs of Dutch drivers Diederik Sijthoff and Steijn Schothorst. In an edition where sunshine and rain shared the billing, the large turnout of fans also witnessed the victories of Oliver Rowland and Matthieu Vaxiviere in the Formula Renault 3.5 Series, Ukyo Sasahara and Jake Hughes in Eurocup Formula Renault 2.0, as well as the demonstration runs of Max Verstappen in the Infiniti Red Bull Racing F1 Show!

In the competition debut of the Renault Sport R.S. 01, the duo of David Fumanelli and Dario Capitanio (Oregon Team #8) won ahead of the tandem of Luciano Bacheta and Niccolò Nalio (Oregon Team #6), making it a one-two finish for the Jerry Canevisio and Piergiorgio Testa run team. Starting from pole position, Richard Gonda and Andrea Pizzitola (ART Junior Team #2) finished third. On Sunday, the Dutch drivers and teams monopolised the honours with the sprint race victory in Prestige going to Diederik Sijthoff (V8 Racing) and the Elite win taken by Steijn Schothorst (Equipe Verschuur). Local drivers, Wolfgang Reip (Monlau Competicion) and Sarah Bovy (Monlau Competicion) finished on the podium in Elite and Prestige respectively. At 26 years of age, Sarah Bovy becomes the first female driver to create such a feat in a race in the World Series by Renault.leads the general classification.