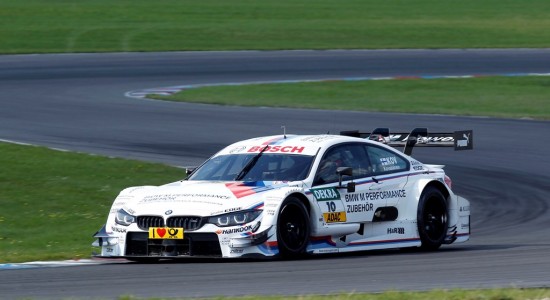 Just one week after Macro Wittmann triumphed at the iconic Nürburgring, BMW Motorsport has spent four days testing in preparation for the final phase of the DTM season. From Monday to Thursday, the BMW drivers completed over 3,000 kilometres at the Lausitzring, which will host the eighth round of the touring car series on 14th September.

Making his debut at the wheel of the BMW M4 DTM during the tests at the “EuroSpeedway Lausitz” was ex-Formula One driver Heikki Kovalainen. The 32-year-old racing driver from Suomussalmi, Finland, contested 111 races at the pinnacle of single-seater racing between 2007 and 2013. When Kovalainen won his first Grand Prix in 2008 at the Hungaroring, he was joined on the podium by current BMW DTM driver Timo Glock, who finished runner-up.

Kovalainen took his opportunity at the Lausitzring to get a picture of the BMW M4 DTM. For BMW Motorsport, the test programme also included numerous long runs on prime and option tyres. The engineers also tested several set-up variants, which it has otherwise not been possible to run during the limited practice time on DTM race weekends. The test took place on the same circuit as will host the eighth race of this year’s DTM season.

“First of all I am grateful that BMW Motorsport offered me the opportunity to drive its car. I was really looking forward to this interesting experience. To be honest, I didn’t really know what to expect as I have never driven a car like this. But I felt really comfortable in the BMW M4 DTM from the very beginning. It’s an impressive car. Of course, it is heavier than a Formula One car and has less power, but the aerodynamics are very good and you can drive through corners very fast” said Kovalainen.