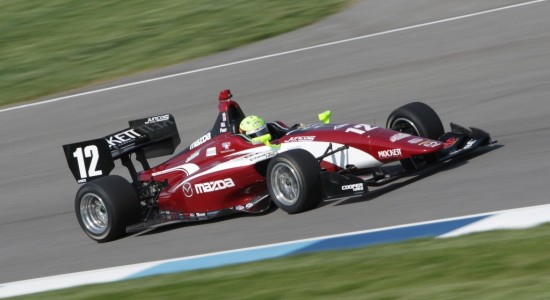 The Indy Lights Presented by Cooper Tires championship contenders will race on the challenging 2.238-mile, 11-turn Mazda Raceway Laguna Seca. The champion will be awarded a $1 million Mazda Road to Indy scholarship toward the Verizon IndyCar Series with three guaranteed races in 2016, including the 100th Running of the Indianapolis 500.

“It’s kind of a winner-take-all situation, and hopefully it’s us,” said Spencer Pigot, 21, of Orlando, Fla.

Each Indy Lights race awards 30 points to the winner, 25 for second place through six points for 15th place. One bonus point is awarded each for the pole position, most race laps led and the fastest race lap.

“We’ve all been in this situation before and we just have to focus on our own car, our own race and hopefully we can get a good qualifying spot and stay out front,” Pigot said. “In the back of our minds, we know that, no matter what, we have to beat Jack (Harvey). If we don’t find ourselves out front, that will be our next goal, to make sure we gain points in the first race and see what we can do in the second race.”

“Last year, I had two poles and two wins in the last race weekend of the year, so I feel very confident in what I can achieve as a driver and I’ve got massive belief in my team,” said Harvey, 22, of Lincoln, England. “It’s just down to me and my team to get the job done. Winning the championship would definitely help our cause progressing forward into (the Verizon) IndyCar (Series).”