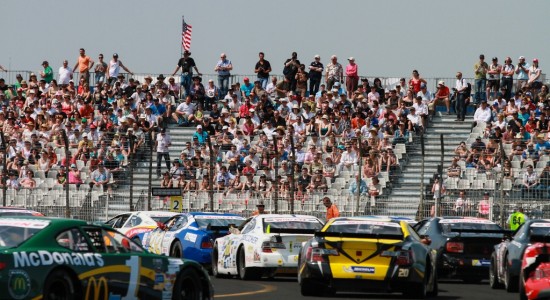 Oval racing is quickly surging to a huge popularity thanks to the Tours Speedway, which in just two editions under the NASCAR banner has become one of the most coveted events in the European calendar. Drivers and teams are getting ready for the battle and each of them has different expectations for this unique weekend, but all somehow include winning.

“I’m really happy to go back to Tours, because it’s a very special track. It’s a great event, with lots of fun, a unique atmosphere and lots of people watching the race,” said Frederic Gabillon (#12 Still Racing Chevrolet Camaro), who won both ELITE 1 races in 2013 and comes to Tours as one of the favorites. “We had a great car last year and I hope to win again. The competition will be very tough and restarts will be crucial.”

The French oval, built in downtown Tours with the involvement of the entire city, will host on July 5 and 6 its four 75-laps races held under full NASCAR rules. It will give the fans an unforgettable show, with close short track racing, double-file restarts and Green-White-Checkered finishes. This year, the only NASCAR short track in Europe features a new 10.5-degrees banking in turn 1 and 2 and longer straightaways that bring total length of the Speedway to almost ½ mile (650 meters).

“I think the setup will be less of a compromise, because both ends of the track are banked. We will be faster and we’ll have a better chance to make the outside work,” said reigning champion Ander Vilarino (#2 TFT-Banco Santander Chevrolet SS), who raced on all the versions of the track and wants to close the 9-points gap that separates him from first place.

Tours Speedway will also mark the first experience on an oval for various drivers, who are preparing themselves for a whole new kind of racing. “I’m very excited! From the pictures I saw, Team FJ and Nascar made a great job to design this unique track. It’s going to be a very special event,” declared championship leader Anthony Kumpen (#24 PK Carsport Chevrolet SS). “We did a few days of test sessions at an oval in Holland and we learned a lot setup-wise and driving-wise. I also had some calls with experienced NASCAR drivers and engineers in the US and I hope to be able to preserve my leadership.”

Everything is ready in Tours’ Parc des Expositions and European race fans are also eagerly waiting for an event that every year gives them countless emotions and promises to attract a crowd of more than 40 000, but that’s not it, because they’re already asking for more oval racing!