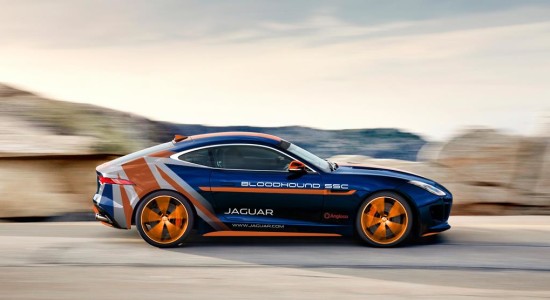 Jaguar will unveil the F-TYPE R AWD Bloodhound SSC RRV at Coventry MotoFest. This particular Jaguar is one of the cars that will support the Bloodhound world land speed record attempt.

The Bloodhound F-TYPE R is the latest project of Jaguar Land Rover’s Special Vehicle Operations and is wrapped in a bespoke livery created by Jaguar Design incorporating the Bloodhound SSC colours.

As Technical Partner of Bloodhound SSC, Jaguar is supplying engines, engineering expertise and a number of support vehicles for the attempt to break the world land speed record.

The F-TYPE R AWD has already fulfilled a critical role in the development of the Bloodhound SSC with a communications test back in November 2014. Fitted with the same radio equipment as the rocket powered Bloodhound SSC, the F-TYPE was driven head-to-head at top speed with a similarly equipped jet flown at 500 knots and just 20 feet above the ground. The combined closing speed of almost 700mph enabled the successful test of the system that will allow communications between the ground crew and Andy Green in Bloodhound SSC.

More on the Bloodhound project on RACE GLOBALMAG April!