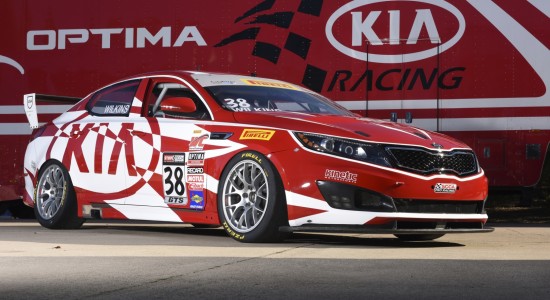 First shown at the 2011 Los Angeles Auto Show, when Kia Motors America announced that it would augment its championship winning Forte Koup racing program with an entry into the Pirelli World Challenge, this championship winning Kia Racing Optima features an exciting new livery for the 2015 racing season.

Kia Racing clinched the 2014 Pirelli World Challenge Grand Touring Sport (GTS) Class Manufacturer Championship in only its third season of competition. Kia defeated rivals Ford, Chevrolet, Porsche, Aston Martin and Nissan to become the first Korean auto manufacturer to win the coveted championship. Kia Racing finished the stellar season with 13 podium finishes, including 5 race wins. Meanwhile, the turbocharged Optima race cars led more on-track miles than any other manufacturer in the class this season, a testimony to the speed and reliability of the Kia Optima.