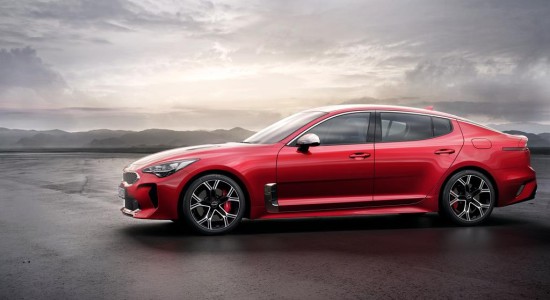 Kia presented the world debut of the all-new 2018 Kia Stinger at the North American International Auto Show. A five-passenger fastback sports sedan poised to redefine a segment currently populated by European automakers, the Stinger promises to be the highest-performance production vehicle in the company’s history. Offered with multiple engine and drivetrain configurations and luxurious accommodations, the Stinger is planned to go on sale in the U.S. late this year. Pricing will be announced closer to the vehicle’s launch date.

From its sleek front clip through its svelte flanks, and up to its powerful haunches, the Stinger exudes a muscular confidence. Key to its road presence are the rear-wheel-drive proportions; a long hood and short front overhang, an extended wheelbase to deliver a spacious cabin, and a long rear overhang with strong shoulders.

While both engines are still under development, the standard 2.0-liter turbocharged four-cylinder Theta II engine produces an estimated 255 horsepower at approximately 6,200 rpm. Max torque of 260 lb.-ft. is available from 1,400 – 4,000 rpm. Performance credentials are further enhanced through the available 3.3-liter twin-turbo V6 Lambda II engine, which is anticipated to produce 365 horsepower at an estimated 6,000 rpm and offer max torque of 376 lb.-ft. from 1,300 – 4,500 rpm. Kia is targeting 5.1 seconds to 62 mph and a top speed of 167 mph with the twin turbocharged V6.