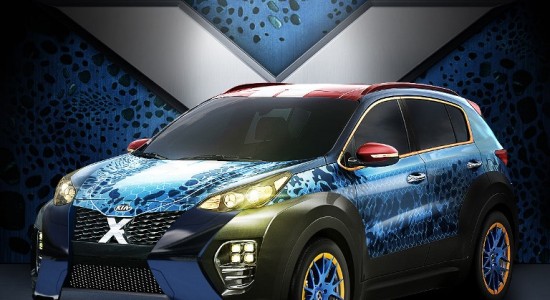 Kia Motors is getting ready to unveil a special, one-off X-Men-inspired Sportage CUV as part of its ongoing collaboration with Twentieth Century Fox and the X-Men movie franchise. The 2nd generation Kia X-Car has been created to promote the new X-Men: Apocalypse film and Kia’s sponsorship of the Australian Open 2016 tennis championship.

Inspired by X-Men character Mystique, the 2nd generation Kia X-Car mimics the appearance and powers of the famous shape-shifter.

The Sportage-based Kia X-Car is the company’s second show car project in collaboration with Fox, following the Wolverine-inspired Sorento that was shown at the Australian Open 2015 earlier this year. The all-new Kia Sportage production model was revealed earlier this year, building on the global success of the best-selling outgoing model with an attractive, all-new exterior design, a host of advanced new technologies and enhanced quality. The all-new Kia Sportage will go on sale in overseas markets in early 2016.