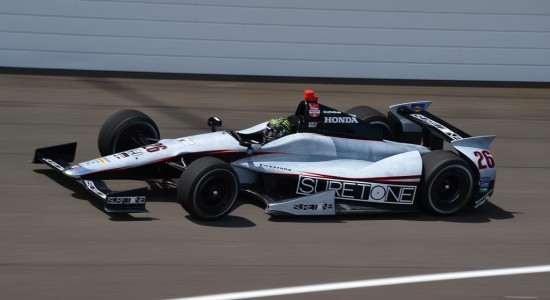 Kurt Busch will attempt to become the fourth driver to attempt the “double”, competing in the 98th Indianapolis 500 and the evening stock car race in Concord, N.C., on May 25. John Andretti, Robby Gordon and Tony Stewart have each done it, with Stewart, co-owner of Busch’s No. 41 Sprint Cup car at Stewart Haas Racing, becoming the first in 2001 to complete all 1,000 miles.

During a refreshing program around the 2.5 mile Indianapolis Motor Speedway Busch was off to a quick start learning the Honda-powered No. 26 Suretone car, recording a best of 220.844 mph on 66 total laps before rain brought an early end to the day.

“It really makes you think,” Busch said. “Overall, it was a good day just to settle in with the team and advance further than rookie orientation. It felt good to give feedback to the team from the car and have them explain things to me how we’re going to move forward. They continued to change downforce combinations on the car and it was just neat to feel all that and check it off the list.”

Also Jacques Villeneuve took part in the refresher test, recording 83 laps in the No. 5 Dollar General-sponsored car for Schmidt Peterson Motorsports with a best of 217.742 mph.

“It took a while to get there. The first few laps were surprising because it felt like I was going fast and I looked and it was 180 (mph),” Villeneuve said. “I thought, ‘There’s still a long way to go,’ and then 190. And another 10 laps I started getting in the rhythm, and once you start going flat all around it becomes easy. I think your brain, your vision just needs to get used to driving at speed.”

In addition to demonstrating car control, placement and consistent driving pattern, the refresher program consists of 30 laps that constitute the second and third phases of the Rookie Orientation Program at speed intervals based on track and weather conditions.

If Villeneuve qualifies for the race, he’ll set a record for the biggest gap between starts held by Cy Marshall and Roland Free between 1930 and 1947.