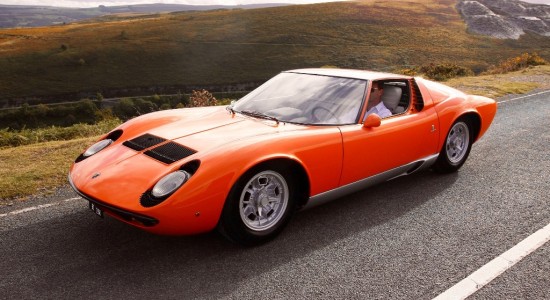 A vivid orange Lamborghini Miura, arguably the most famous Lamborghini in the world, is making a bid for Italian glory as teams of classic cars line up for a unique Six Nations contest at the London Classic Car Show (18-21 February) to find the world’s leading car producing country.

The Miura, chassis number 3586, is the actual car used in the opening scene to 1969’s The Italian Job film. Although apparently written off in an Alpine tunnel, the car in fact was undamaged and sold to a customer after filming.

The legendary Lamborghini will join Ferraris and Fiats, Lancias and Maseratis in the Italian squad as they take on teams from Great Britain, France, Germany, Japan and America. The winning team will be decided by the hearts and minds of visitors to the show, to be held at the ExCeL centre in London’s Docklands.

As 2016 marks the 50th anniversary of the Miura and the centenary of the birth of company founder Ferruccio Lamborghini, its appearance for the Italian squad is highly appropriate.

Heading the home team will be cars from famous marques like AC, Aston Martin, Lotus, Jensen and Jaguar. In the blue corner, among those representing France will be a couple of mid-engined pocket rockets – the Renault 5 Turbo and rally-inspired Peugeot 205 T16 – while Germany’s line-up includes the original Audi quattro, Porsche 356 Speedster and, fittingly in the company’s centenary year, a host of BMWs, including the CSL ‘Batmobile’, an original 328 and an M1. From the Far East comes a host of iconic sporting saloons and coupés, many seldom seen in the UK. Joining the Datsun 240Z there will be an original Skyline GT-R saloon from 1972 plus the rare Toyota 2000GT (just 351 were made). And finally comes the USA team with cars like an original Ford Thunderbird and the vast Cadillac Coupe Series 62.