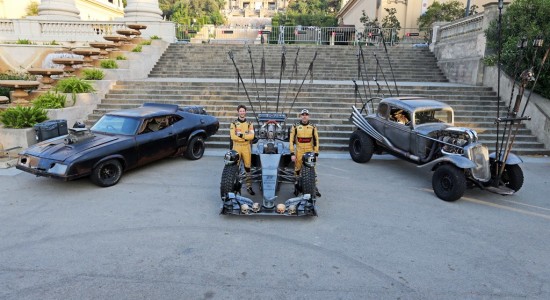 Lotus F1 Team, in co-operation with Warner Bros. Pictures, has prepared a radical-looking proposal for an alternative Formula 1 future.

The vehicle – designated the Lotus F1 Team Mad Max Hybrid – is a fusion of Formula 1 technology reimagined for a post-apocalyptic future to coincide with the 15 May 2015 launch of the epic action adventure Mad Max: Fury Road, from Warner Bros. Pictures and Village Roadshow Pictures.

Fitted with special accessories and heavy modifications for a world gone mad, the Lotus F1 Team Mad Max Hybrid was unveiled at the Barcelona International Motor Show at the Montjuïc Exhibition Centre – at the same location for four Spanish Grand Prix between 1969-1975 – in Barcelona, Spain, on Friday, 8 May, along with two custom, drivable vehicles designed and created for the film: Nux’s car and the iconic Mad Max Interceptor.

Matthew Carter, Lotus F1 Team, CEO: “Lotus F1 Team is always viewed as a challenger team, so this was a fantastic opportunity to work with Warner Bros. Pictures on the concept of producing a Formula 1 car for the ultimate challenge of the nightmare scenario of an apocalyptic society seemingly headed for oblivion. This car acknowledges the tenacious nature of Lotus F1 Team; no matter what the rules in Formula 1’s future, we are here to stay and compete.”