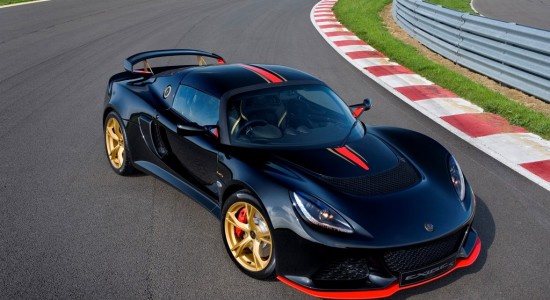 This summer 81 Lotus Exige S cars will receive a Lotus F1 Team inspired livery and interior trim to commemorate the number of grand prix victories held by the Lotus marque up to 2013.

The supercharged 3.5l V6 Exige S is well known for its focussed dynamic performance, now, with a striking bespoke black and gold paint scheme with red accents and gold 17” front and 18” rear cast alloy wheels, the Exige LF1 leaves no doubt as to its heritage.

Exclusivity and performance are at the heart of the Exige LF1; each car will be individually numbered with its own limited edition carbon fibre build plate and loaded rich with extras such as the Exige Race Pack with Dynamic Performance Management system, two-piece high performance brake discs and high-performance Pirelli P-Zero Trofeo tyres. For those drivers wanting to optimise their Exige LF1 optional Convenience Pack, heated seats and rear parking sensors are available.

The Exige LF1 makes its public debut during the second week of June, showcased in its right-hand drive guise at the Canary Wharf Motorexpo in London from until Sunday 15 June and simultaneously in its left-hand drive European-spec at Le Mans 24 hours from Wednesday 11 June to Sunday 15 of June 2014.