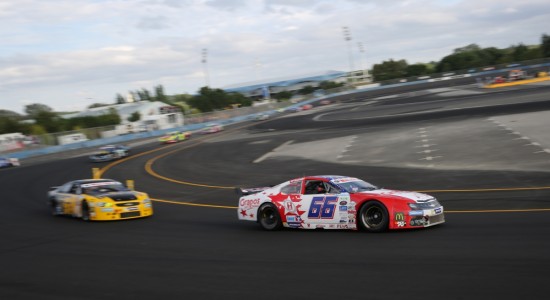 Former GP2, DTM and GT1 driver Mathias Lauda, son of three-time Formula 1 World Champion Niki Lauda, is currently in his first season in the NASCAR Whelen Euro Series, where he drives the #66 DF1 Racing by B66 Chevrolet SS in the ELITE 1 division.

The Austrian driver is really enjoying his experience in the official European NASCAR Series and considering his vast and eclectic driving experience, he’s an authoritative voice to speak about a championship in which he rediscovered the essence and the pleasure of racing.

Close, door to door NASCAR racing “My feeling with the car and the Series is great. I didn’t enjoy racing so much since a long time. The races are so much fun! You can really overtake people with these cars and the way you can drive them. In my career I always drove cars in which overtaking was hard because getting close to another car made you lose downforce. With these cars you don’t lose downforce, everybody is close to each other, the level of the competition is really high and it’s really up to the driver to make a difference. It’s tough racing but it’s really fun!”

Having a close relationship with fans and share the same passion with them “It’s fantastic to have the fans around us in the paddock and in some events even on the grid. This is how racing should be. Put up great races and let the people come to see us from up close. For me the fans are the most important thing because without them we couldn’t race, so our goal is to give them a show that will make them come back again and again. The NASCAR Whelen Euro Series provides great entertainment for the motorsports passionates but also for all the family. It’s a great package and I’m sure that it will grow in the future.”

Racing and winning the first NWES wet oval race “This win was so special and I had a lot of fun in the race. I honestly didn’t expect it to be so great. I thought overtaking in such a small track would be difficult, but in both races I passed many cars and made the outside work in the final stages. I wish I can do more oval races!”

Furtive-eGT to shine in London!