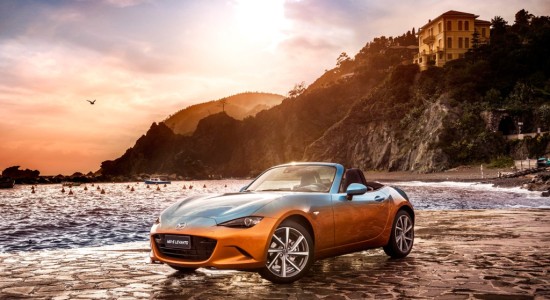 Mazda has chosen Garage Italia Customs to realize a one-off of its fourth generation Mazda MX-5.

The idea for ​​this spectacular interpretation of the MX-5 comes from the creativity of Lapo Elkann and is based on the movie The “Endless Summer”, the legendary Bruce Brown film of 1966 considered a masterpiece of documentary film on Surf.

The car is called MX-5 Levanto: the name is that of a pearl of the Ligurian coast which is considered for the unique characteristics of the seabed of its crystal clear sea, the Italian birthplace of surfing.

The livery of the roadster has been created by developing the concept of ‘endless summer’, putting together the legendary aesthetic to the Californian beach boy with the sophisticated elegance typical of the Italian Riviera. The body incorporates the colors of the long summer sunsets with a bright orange tone that fades in indigo height on the waistline. The special coating has been produced with skilled craftsmanship by skilled artisans of Garage Italia Customs that. The interior holds the chromatic duality of the exterior with a full Japanese denim upholstery, on the dashboard and door panels.