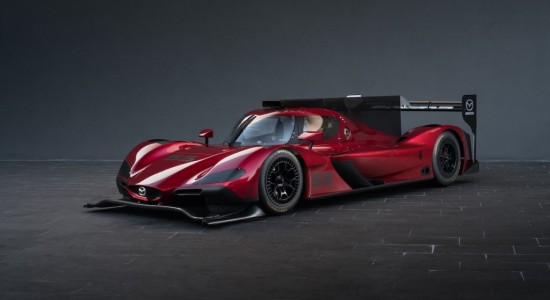 “This new DPi race car reaffirms Mazda’s longstanding commitment to IMSA and the WeatherTech Championship,” said IMSA President Scott Atherton. “This first public unveiling of a DPi is the culmination of several months of collaboration between Mazda, the Riley/Multimatic partnership and IMSA. This car is nothing short of breathtaking, and represents a benchmark example of the vision we have for how manufacturers incorporate their production car design elements into a prototype race car.  We eagerly anticipate its competition debut in the Rolex 24 At Daytona this coming January.”

The new DPi car – dubbed the “Mazda RT24-P” in a nod to the manufacturer’s successful “Mazda Road to 24” driver development program – will use the Mazda MZ-2.0T four-cylinder, turbocharged engine producing approximately 600 horsepower and a Riley/Multimatic prototype chassis with specially designed Mazda bodywork. The bodywork utilizes Mazda’s KODO-Soul of Motion design philosophy and will include elements such as body contours and a five-point Mazda grille.

The South Florida-based SpeedSource Race Engineering will manage the two-car program on behalf of Mazda Motorsports. The pair of Mazda RT24-P race cars will be driven by Jonathan Bomarito, Tristan Nunez, Tom Long and Joel Miller.